The region now known as Peru has a rich and turbulent history. The Inca built a vast empire with many wondrous advancements. The violent European conquest eventually made the region a colony of Spain and many of the famed 8 reales coins were minted in Lima. As Peru sought independence from Spain, they were challenged by yet more conflicts during the 1800's. In the late 1800's a period of  rebuilding began in which virtually all aspects of the republic were reformed. The coinage of this period depicts a seated woman on the obverse and the state shield on the reverse. The monetary unit in use at this time was the Sol and fractional denominations of 1/2 and 1/5 Sol as well as Dinero (1/10 Sol) and 1/2 Dinero. The 1/5 Sol is equal to 20/100 parts of a Sol and thus is similar in concept to the metric denominations embraced by many European nations at the time. This coin is analogous to the U.S. 20 cent piece, though, apparently the Peruvian coinage was more successful than its U.S. counterpart.

The 1/5 Sol was minted intermittently from 1863 to 1875 at the Lima mint, 1885 at the Arequipa mint, and production resumed at Lima mint from 1888 to 1917. Recent Krause catalogs are missing much of this information, but older catalogs and other resources list it correctly. On most of the Peruvian coinage of this time you can find two letters on the coin near the date which identify the mint assayer responsible for the coin. JF in this case. This particular coin also has the initials JR to the left of the sun shield on the obverse indicating that assayer JR was also involved in overseeing this coinage.

This coin is well struck with prooflike surfaces and heavily frosted devices on obverse, and to a lesser degree, on reverse. There are many small die polish lines in the fields as well as small marks commensurate with the grade. There is a small dark area at 3 o'clock on obverse. An attractive coin. 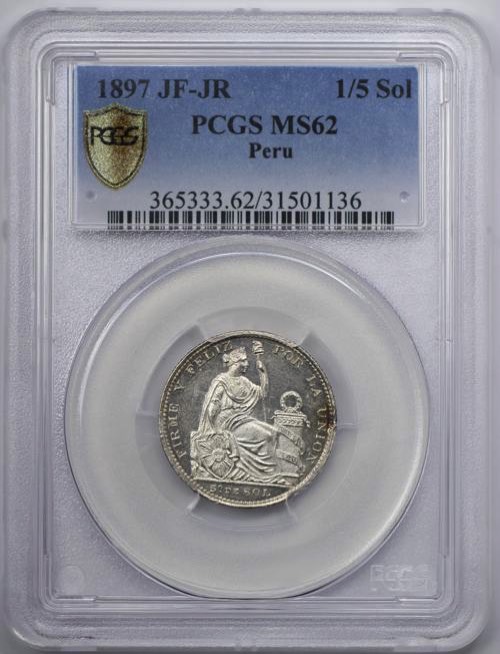 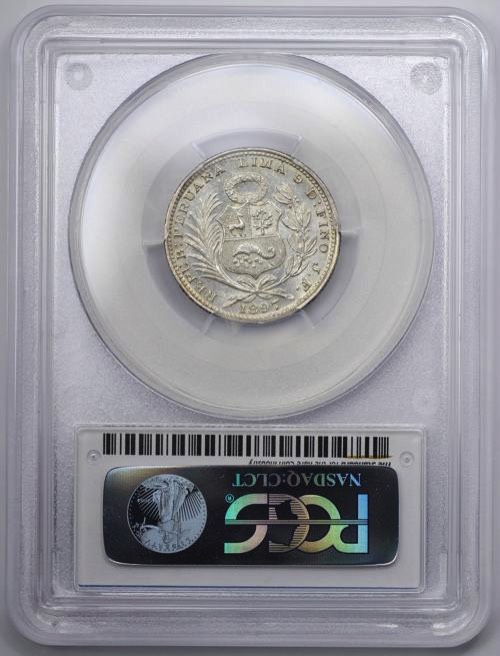 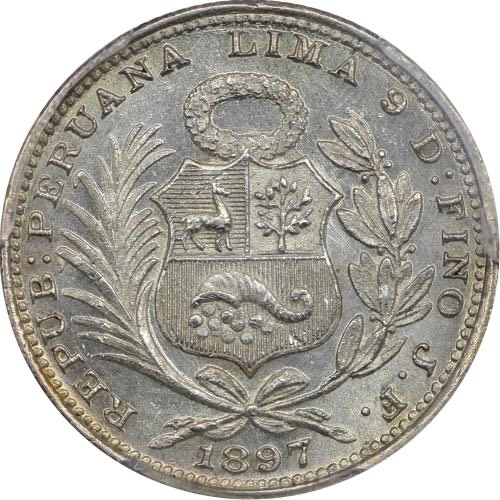