Medal: 1910 Exposition of Spanish Art - Centenary of Independence of Mexico

obv: Crowned and bejeweled woman stands at center with a lion at her right. This woman, representing Spain, holds a crown of laurels in her left hand and overlooks two women at her left. The two women are holding a vase and painters implements, symbolizing the arts.  Legend surrounds: EXPOSICION ESPANOLA DE ARTE

rev: Woman stands at center with an eagle with snake in it’s mouth at her left and she holds an olive branch in her right hand.  Legend surrounds: PRIMER CENTENARIO DE LA INDEPENDENCIA DE MEXICO

Inscription in field: MCMX  Below at left: RODRIGUEZ

This medal was minted in Barcelona, Spain for the Exposition of Spanish Art held in Mexico City in 1910. The medal celebrates 100 years of the Independence of Mexico from Spain. It is somewhat ironic that such a medal would be struck in Spain for an exhibit in Mexico. It is also interesting that shortly after this exposition the Mexican Revolution of 1910 began.

Gloriously toned surfaces highlight the beautiful allegorical symbols of Mexico with eagle on obverse and Spain with lion flanked by personifications of art on the reverse. A joy to behold.

Please scroll down to view images of the medal. 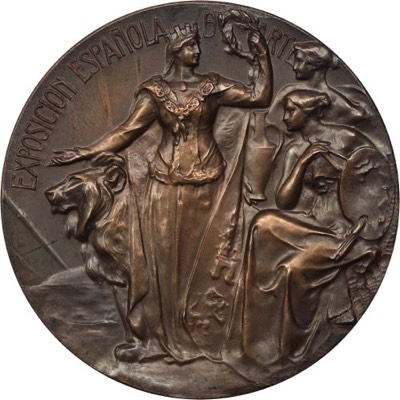 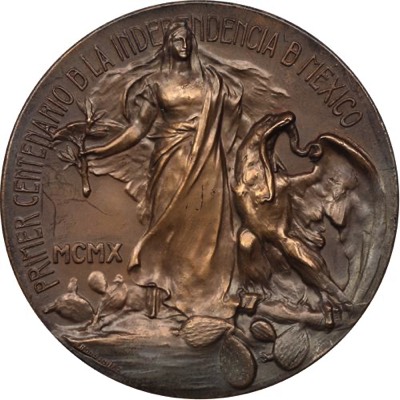